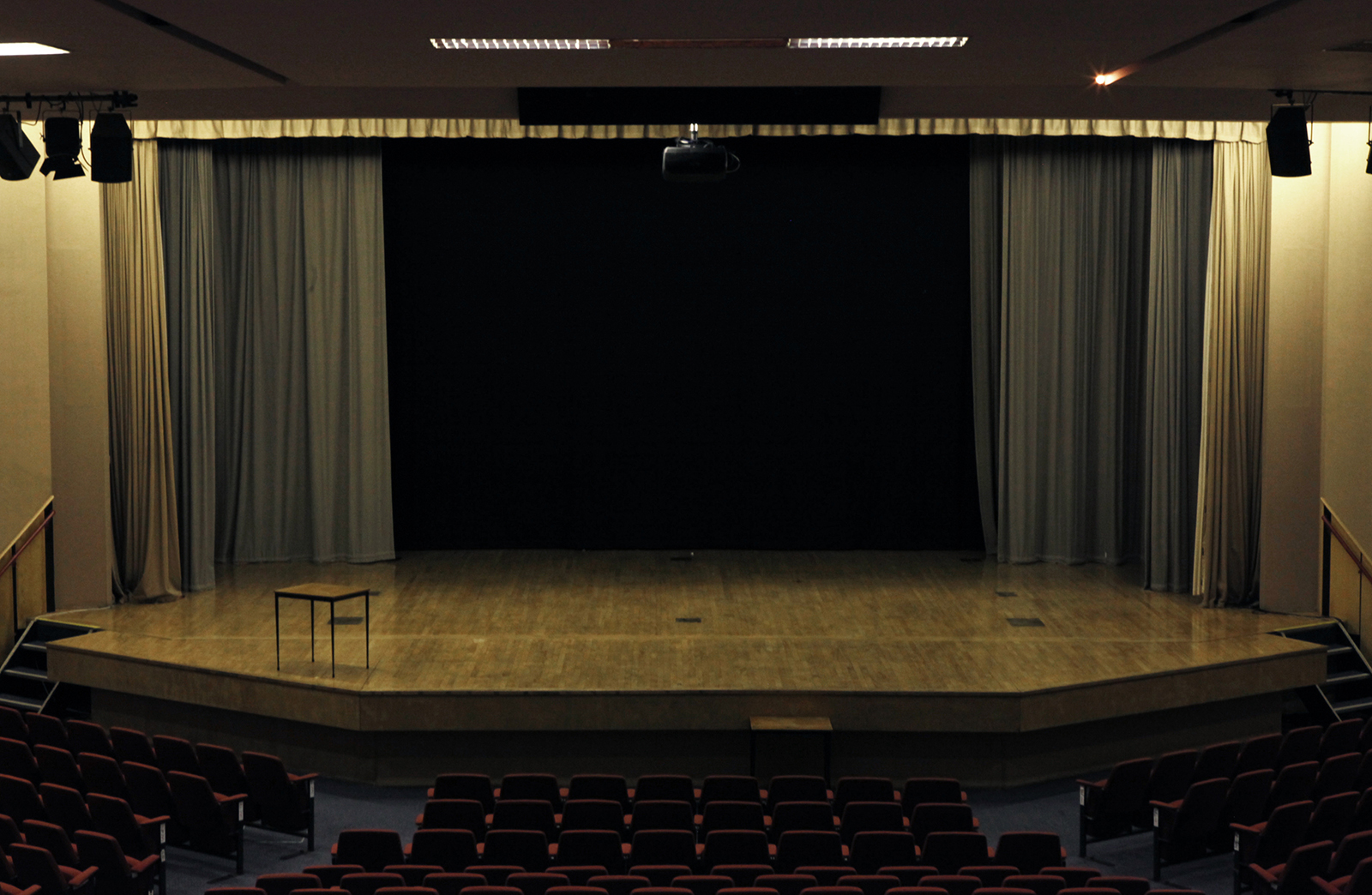 The auditorium at the Institute of Education on Bedford Way is filling up. The atmosphere is coloured by excitement and apprehension. The hall is large and must seat over 1000 – but there seems to be confusion over the reserved seating and the complimentary seats. People are standing, people are being re-seated, and more people are coming in, there are bottlenecks.

Academia has opened its doors to unpredictability and nervous tension is in the air. David Lynch doesn’t do lectures but he does answer questions. There are two aisles leading through the stalls to the front of the stage and at the end of each one there is a microphone on a stand, the top of which is around the same height as the stage, which is fronted by light wood tongue-in-groove panelling. But we’re getting ahead of ourselves. First there are introductions and then some dull but worthy films about the benefits of play in the pre-school years.

Few of the audience, I suspect, have come to see this part of the programme and the inclusion of these films seems to reflect an anxiety that David Lynch is perhaps… not quite academic enough. Probably this is because of his reputation as someone who has opened a doorway to another world, a place where things don’t make sense – and where bad things happen to people who look like students. The anticipation seems to be corroding the corners of the hall, the lights have gone down and it feels smaller, more claustrophobic. Perhaps there are people here who have come in the hope of having a hole opened in the fabric of their world, perhaps they are hoping they will hear ‘something’ that is going to change things.

When David Lynch comes to the stage the applause is excited and expectant and falls away abruptly. When he starts to speak the phrase Jimmy Stewart from Mars, supposedly coined by Mel Brooks, comes to mind.

“WELL, I’M DAVID LYNCH AND I’M HAPPY TO BE HERE AND ANSWER ANY QUESTIONS YOU MIGHT HAVE, SO PLEASE COME DOWN TO THE MICROPHONES AT THE FRONT HERE.”

Like the FBI agent he plays in Fire Walk With Me, he talks a lot louder than the situation really demands – he is not exactly shouting but seems like someone trying break though an invisible force field to an audience marooned in an adjacent but parallel universe.

There are already a few people queuing at the microphones and the first question comes from a youngish woman with a reedy New York accent:

“Mr Lynch, I was wondering… where do your ideas come from?”

IF YOU WANNA DO ANYTHING YOU GOTTA HAVE AN IDEA. NOW AN IDEA IS LIKE A FISH. YOU CAN WAIT FOR YEARS FOR ONE TO COME ALONG, AND SOMETIMES YOU THINK IT’S NEVER GOING TO COME! THEN SUDDENLY ONE DAY THERE IT IS! A LITTLE GOLDEN SPARKLING FISH WITH GREEN EYES AND GOLDEN SCALES AND YOU GOTTA HOLD ONTO IT – AND THEN ANOTHER ONE MIGHT COME AND EAT UP THE SMALLER ONE – IT ALL STARTS FROM THAT ONE IDEA, AND THEN YOU CAN GO FOR THE REALLY BIG FISH.

The next question has a similar timbre;
“Mr Lynch, There’s a lot of smoking in your movies – why is that?

I WAS A COMMITTED SMOKER FOR 25 YEARS SO I GUESS IT FOUND ITS WAY INTO THE MOVIES I MADE. THEN ONE DAY I JUST GAVE UP – I QUIT! ABOUT 5 YEARS AGO – I TOOK IT UP AGAIN! – I REALISED THE CALL WAS JUST TOO STRONG.

At this point I noticed a man coming from the side entrance. He passed along the aisle in front of me and then took a right turn down towards the microphone. In silhouette I could see he was large, between 30 or 40 with a bald or shaven head and a long coat. He had a plastic carrier bag in either hand which he leant against the front of the stage when he arrived at the microphone.

“I’m a great admirer of yours Mr Lynch” he said,the PA system sending his Dublin accent into the darkened corners of the hall, – “I was just passing by and I saw the poster sayin’ you were doin’ a talk – er… I didn’t have a ticket so I just came in… yer man didn’t stop me, so here I am – happy to be here.” He bent down and pulled a book from one of the carrier bags holding it at head height and pointing at it with the other hand;

“This here is the Guinness Book of Records and that’s me on the cover there – I come from a long line of bare knuckle boxers – from Ireland”, he added unnecessarily, “and I hold the record for one finger push-ups”.

Fear passed through the education faculty like a shadow… a real life David Lynch character had been summoned from the ether and was suddenly at the controls of the ship – we were heading towards that parallel universe, the imagined presence of which had no doubt concerned the events committee as they debated the booking. The lecture theatre had become very quiet apart from some woody creaks the from the auditorium as audience members stiffened in their seats.

WELL SETTLE DOWN ROY – AND TELL US YOUR QUESTION!

“Well I’m a writer – he held up the other carrier bag – and I’ve got a few ideas for a film and I was wondering if you’d maybe take a look at them and give me some pointers, like…”

WHY DON’T YOU GIVE YOUR SCRIPT TO BOBBY HERE AND I’LL BE SURE TO TAKE A LOOK AT IT AND GET BACK TO YOU JUST AS SOON AS I CAN.

Bobby came out from backstage and took the bag. His immediate presence in the wings and practiced retrieval of the manuscript, suggested that this was not the first time he had been the recipient of untidy plastic bags, stuffed with the dreams of students from the University of Life.

I don’t think anyone had any doubts of David Lynch’s sincerity, he really was going to read through those unruly pages, amongst which he might very reasonably expect to find some of those little golden fish.