A yellow dog briefly raises its head from the decking as the four-by- four turns into the yard. Colourful climbing plants hang motionless from the terracotta eaves of the bungalow. It’s Christmas day.

A landlocked province between Kerala, Karnataka and Tamil Nadu, Coorg is an upland area well known for its forests and wildlife parks, but perhaps less well known as a preferred retirement location for Indian army officers.

The house is stylish and as is common in many middle class Indian homes, there are hangings and furniture made by local artisans often in collaboration with urban Indian designers. I suspect his grand-daughter, who is a student at one of the Art schools in Bangalore, has had a hand in some of it. She has also recommended the homestay service that Colonel Nayak and his wife Shikha occasionally offer. At dinner we ask the Colonel about the coffee plants which surround the house and garden and which are his main retirement project.

What about an electric fence?

We have an electric fence but the elephants are very intelligent, they put the curled up pieces of eucalyptus bark on the wire so they can climb over without getting a shock.

Can’t you put up a higher fence?

No, no, they will just push a tree down on it…

He takes another spoon of rice, his expression clouded by the thought of this one last battle against the forces of nature which he will never win. Somewhere out there in the dusk his adversaries are patiently treading through the undergrowth, outliving him.

Across the Eastern Ghats on the other side of India lies the second longest continuous sand beach in the world, a mile of sand exposed at low tide. In the evening cool the Chennai city workers come out to stroll in their thousands, their saris and short sleeved shirts saturated by the orange rays of the the setting sun. It is this image we see the next morning when the news first breaks of the tsunami on television. The significance of the broadcast is hard to absorb; incongruous in the still, humid air of Coorg.

Only a few days before we had been patrolling the coast road for locations for photoshoots and found one in Chennai amongst the stand of trees which separates marine drive from the beach. There was another possible venue twenty miles down the coast in an amusement park called VGP Universal Kingdom, or Golden Beach.

When the tsunami struck Chennai on boxing day morning it didn’t cross the promenade with any significant force, but some buildings on the shore collapsed, the foundations being built largely on sand, and some of the fishermen and members of their families who were at home at the time were killed. Further down the coast and in Sri Lanka the destruction was far greater.

When we got to the city two days later the shore road was deserted apart from the ambulances which cruised up and down it, their tannoy’s broadcasting health advice in Tamil and urging people to get cholera shots.

Just fifty miles further north on the same road, and nine years into the future, a rocket called Mangalyaan will blast off from the launch pad at the Satish Dhawan Space Centre en route for Mars. It will carry five instruments, the most significant being the Lyman-Alpha Photometer, a device dedicated to measuring the relative abundance of Deuterium and Hydrogen in the planets upper atmosphere. The data gathered from this research will help scientists establish whether there is, or ever was, water on the surface of Mars. 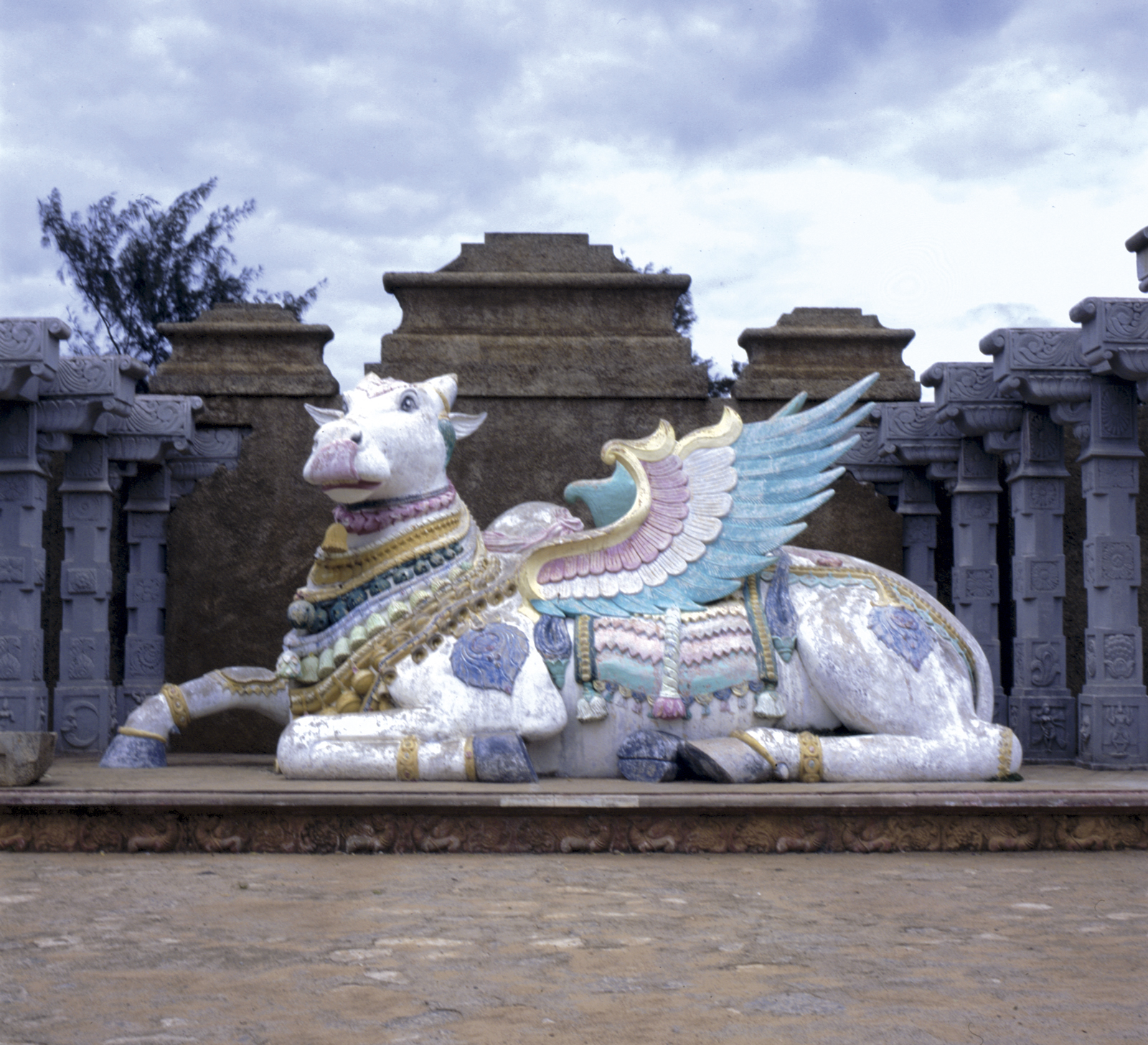 Later we drove down to visit Mr Sivakumar at Golden Beach. The park lies between the road and the sea and has two outdoor sound stages, some rather sedate fairground rides and a compelling collection of plaster and stone statues. Historical and mythological figures stand shoulder to shoulder and include Shiva, Gandhi, Hanuman, Jesus, the Virgin Mary and a large cast of Bodhisatvas and folkloric characters.

Visitors from the city and from villages further inland come to eat ice cream and wander in the dappled sunlight between the palm trees while admiring the water features and cement fondue temples. There are outdoor restaurants and cafés serving chicken burgers, chips and Godzilla dosas. Entertainers and chancers patrol the park doing impromtu performances, some of them occasionally getting work at the film lots across the road which are collectively the centre of the Tamil film industry, the next largest after Bollywood. It is these people we are hoping to photograph. 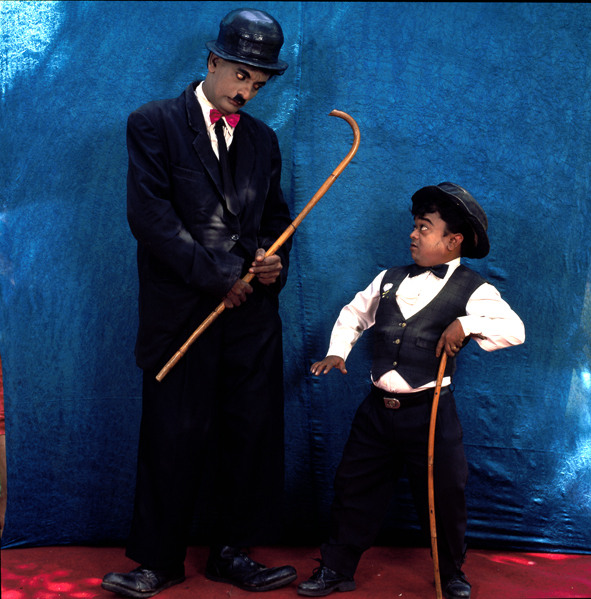 Mr Sivakumar was in a philosophical mood both about the Tsunami itself and its impact on the park and the workers it sustains, himself among them.

There wasn’t such a big problem here though – The water came up the beach and into the park, but the place was closed – it was in the morning – so no-one was here except the staff and they are all OK.

He bent down and picked up a plastic toy which lay on a swathe of damp vegetation; one contour in a confused map of overlapping high water marks.

This is the busiest time of year for us, so we will have to see what happens… see what the mood is like in two weeks… whether people are coming for Pongal in significant numbers. If they do that then I think you could go ahead with the photoshoot at Golden Beach as all the other attractions will be there, and the visitors of course…

We left for Bangalore. Media coverage of the disaster over the coming days began to turn from reporting the numbers of dead to stories of miraculous escapes and reunited families. The front page of The Hindu carried an image of a Sentinalese Islander shooting an arrow at a coastguard helicopter hovering some 50 feet above his head. The picture is pixillated and looks like it might be a screen grab from a video camera mounted on the underneath of the aircraft. It is accompanied by a caption: 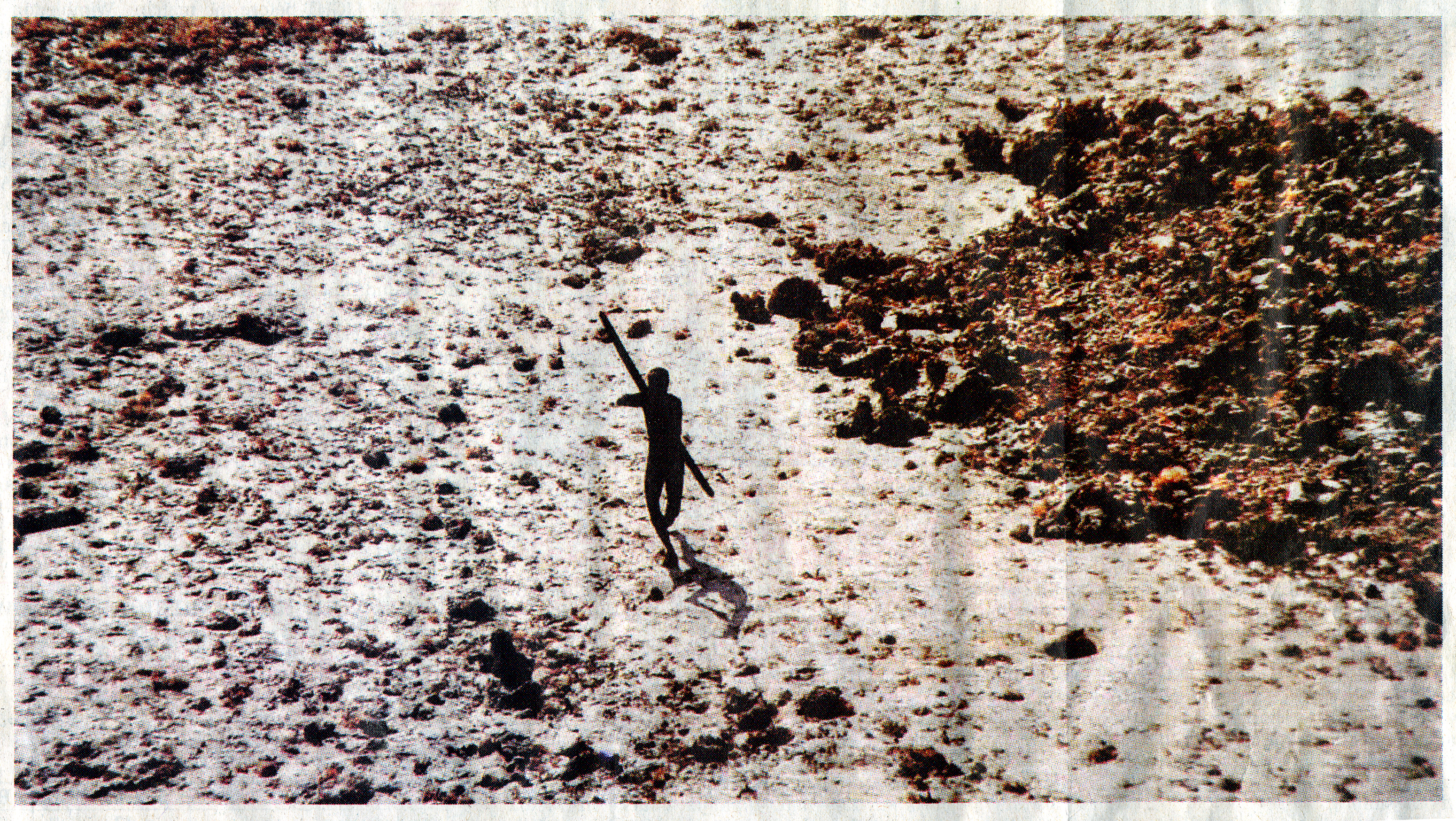 The Sentinalese, one of the world’s few surviving palaeolithic people, are generally hostile to outsiders. The Coast Guard, which released the photograph, has refuted reports that the aboriginal population of the Andaman and Nicobar Islands has been threatened after the tsunami. Officials say that ancient knowledge of secret signals in the wind and the sea have contributed to their survival all these years. A census conducted from a distance in 2001 placed the Sentinalese population at 39 – 21 males and 18 females.