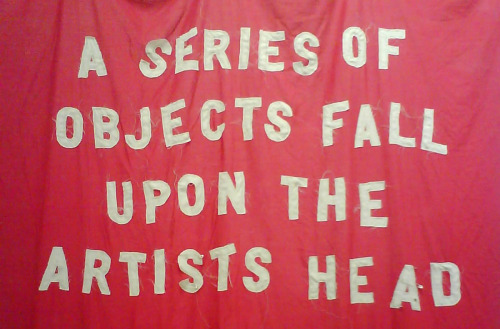 It’s the interim show at the Slade School of Art. The exhibition of second year work is distributed over three floors of a large brick built block with metal window frames near Gordon square, which has been creeping slowly and eerily towards decrepitude for some years. The work has bestowed a temporary and disposable cool on a building that looks like it may have housed Work and Pensions in the post war years.

As is usual the work is a stirring mix of the inspired and the bewildering. Painting, installation, video and performance by the glamourous and the pragmatic from Morecambe Bay to Hue City.

Walking around it’s clear that most of the visitors are not here to consume, they are ‘in the business’ – that is, they are positioning themselves relative to the work they are seeing. A lot of energy is being spent in small existential adjustments; re-evaluations of points of view.

I stop to watch a performance in which a woman is wrestling with herself inside a human sized nest of birch twigs – a strangely intense event like a dream from which one cannot wake.

Further on through the open plan floor there is an Asian woman standing beneath a small fridge on top of a shelf. Above the shelf is a sign;

FRIDGE CAN BE OPEN FOR UP TO 3 MINUTES

An Australian man, who is nearer than I am, approaches her;
Can I have a look in the fridge please?

She opens the fridge but keeps her hand on the handle. Inside there seems to be some kind of construction which looks like it could be made of vegetables, but it’s hard to be sure as its covered in ice crystals.

Suddenly – she slams the door shut.

That was never 3 minutes! says the Australian

The Asian woman deftly swings her arm up to the sign, singling out the words UP TO with a focus and precision that indicates beyond any doubt that this exchange is over. He is unsure of how to respond to such a categorical rejection, laden as it is with Freudian overtones:

He drifts, deflated, into the next space.

A year later I get an invite to the degree show which is in the Slade proper from Billie who is showing her books and drawings. By co-incidence she is sharing this space with the woman with the fridge – which has now morphed into a free standing model of the type used to sell ice creams in corner shops. It is positioned  diagonally across the room – there has been some tension regarding the allocation of space –  but this time the vegetable sculptures are visible from above through sliding acrylic panels.

In another part of the building, Billie’s flat mate Iris is doing a performance for which which she is dressed in a red twinset and pearls and has assumed the role of therapeutic councillor. She has a desk and two chairs and has invited people to talk to her. There is no shortage of willing participants and before long they are telling her things that she really doesn’t want to hear.

She reminds one man that she is not a qualified therapist and he looks at her in a way that suggests that the meaning of her words has passed him by entirely. She realises, suddenly, that people don’t care who she says she is – it’s the customer who is right, and for this particular client, it’s not so much about participating – it’s about dishing it out…

A few months later I get a call from Billie.

There’s someone who was in my year showing some work at the People’s Supermarket in Lambs Conduit Street which is just round the corner from you – you want to go?

We meet there with about 5 other people who have made the trip and drink wine from plastic glasses amongst the shoppers. The work seems to be some bottomless cardboard boxes which have been attached to the inside of the windows – but no-one refers to them the whole evening. One of the other guests is the woman with the fridge – no doubt lured by the prospect of fridges waking up to art. We stand next to each other at the debouchment of the tinned fish aisle.

I remember you – you’re the person with the fridge

Are you planning any other work at the moment?

yes I have another work – it is about.. mm.. sea creature…

Are you going to use seafood?

No I think all vegetable

What kind will you use?