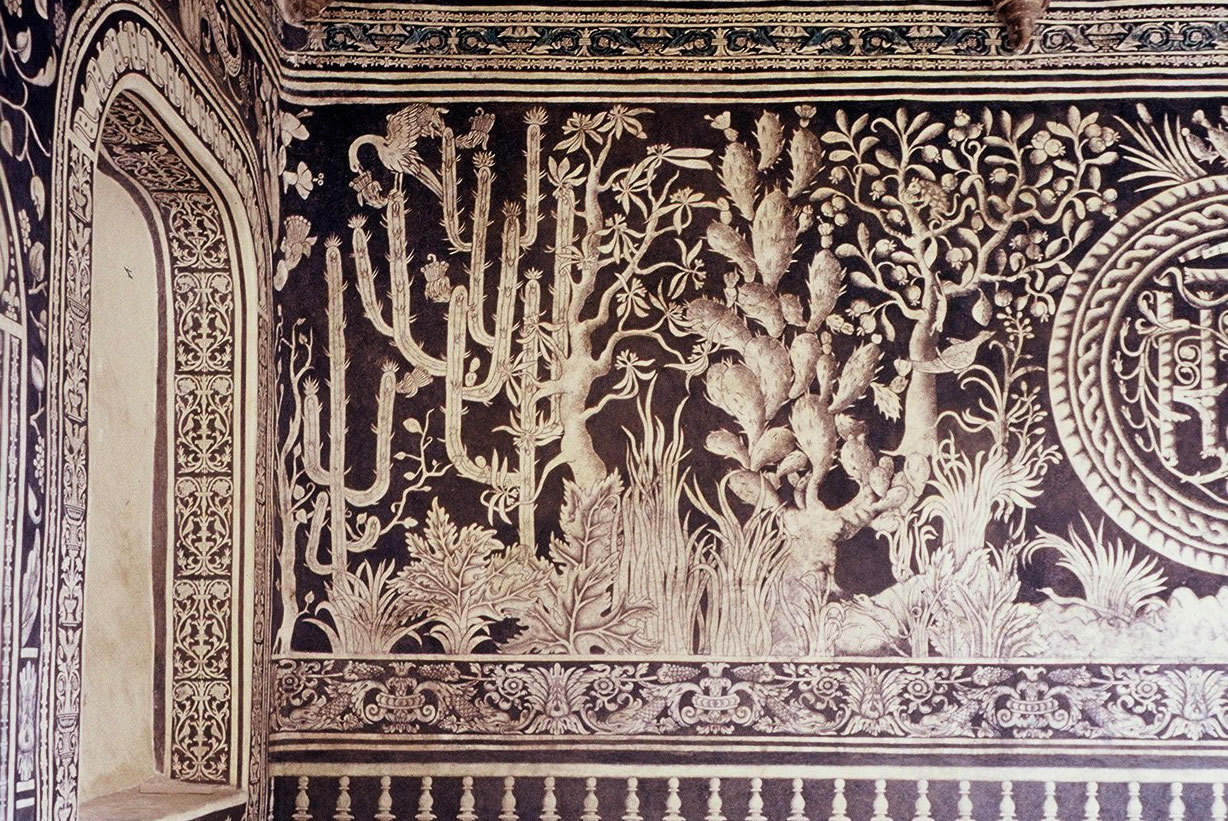 The poppies in Frida Kahlo’s garden come to mind two days later during a visit to the Convento del Divino Salvador in Malinalco. Despite being dedicated to the Divine Saviour, the church is more famous for the monochrome friezes of febrile plant life which cover its interior walls. Except for an alcove in which a Franciscan monk discourses with death, (depicted as a skeleton holding a scythe), almost all the interior space of the church is given over to the depiction of hallucinogenic plants. Carmen points out ‘Angels Trumpets’ (Brugmansia arborea) from which the drug Scopolamene is derived;

Sometimes called ‘Devils Breath’ or ‘The Zombie Drug’, it strips even inadvertent users of their free will. It is often used by street hustlers in Central and South America to render victims insensible enough to walk willingly to cash points and empty their accounts, while appearing completely sober and in control. As the drug also inhibits memory formation victims often have no recollection of the event and are unable to make even sketchy statements to the police. The margin between intoxication and death is so narrow that few victims escape without some long term damage.

We get back in the car, reflecting on the radical compromises made by the catholic church in its efforts to blend into a magically oriented historical past, so well stocked with sorcerers and conmen.

A friend of Carmen’s called Pedro is driving us to Teohuatican. The zombie drug still hovers in the background and its presence seems to have released a cache of gruesome stories from Pedro’s memory. Carmen moves the conversation along during an over-detailed account of a small boy being eaten by a tiger in a safari park in Paraguay. Without really pausing, Pedro switches channels to his friendship with William Burroughs who he knew in Mexico, describing how he become a co-administrator of the Burroughs estate after the writers death.

He is currently helping to organise an exhibition of Burrough’s target drawings in London; naive portraits which the writer drew and then shot with his Smith and Wesson .38, thus combining his twin enthusiasms of art and guns. Burroughs made these late in his career leading many to conclude that the night that he shot and killed his wife Joan Volmer In 1951, at a party in a drunken game of “William Tell”, was the defining moment of his life. He was arrested at the the scene, the american-owned Bounty Bar, but only spent 13 days in jail. His brother allegedly bribed Mexican lawyers and officials to release him on bail while he awaited trial for the killing, which was ruled as culpable homicide. He spent the next 23 years in exile eventually returning to New York in 1974.

Burroughs originally came to Mexico to escape another possible jail sentence in Louisiana, but was clearly captivated by the place. For someone already committed to a heroin fuelled engagement to the skull beneath the skin, the hallucinatory conjunction of death and creativity in Mexican culture must have come as a revelation.

He had originally planned to stay for five years and apart from looking for unusual drugs, he had ambitions to study Spanish and the Mayan languages as well as The Codices – the concertina book format of the Mayan picture script, in which sacrifices and rituals are laid out in the colourful lines of pictograms that snake across its pages.

The numerous art deco buildings of Mexico city are full of references to pre-hispanic architecture, the subway signage system is also based on pictograms – rather like the codices. The bewildering variety and depth of the culture renders it perhaps more foreign to the eyes of Europeans and North Americans than that of the far east. Despite the art schools, theatres and oxygen bars, outsiders tend to grasp at the countries’ identity through its stereotypes. Even in the more insightful attempts made by observers to describe the city and the lives of its inhabitants, magic and death still feature significantly.

London based film maker Kevin Hull came to Mexico City in 1992, to make a documentary called The Day of The Dead which explored the work of the celebrated Mexican pathologist and essayist, Francisco Gonzalez Crussi. Privately, he complained about the amount of time he was obliged to spend in pathology labs watching the good doctor sawing off the blackened legs of cadavers with a band saw, while he extemporised on the insights gleaned from a poetic imagination and a lifetime in pathology.

In spite of any reservations he may have had about dealing with such dark material, Hull was to becoming the BBC’s ‘go to’ director for the strange and the difficult. The next film he was commissioned to direct was for a series called Relics and the resulting production was Einstens Brain (1994). The production was to take him on an odessey across America during which he was also to cross paths with William Burroughs.

The front man for Einsteins Brain was an eccentric professor of mathematics and science history from the unlikely Kinki University in Japan, called Kenji Sugimoto, who had spent thirty years documenting Einstein’s life and legacy.

It is my great regret that I never met Einstein!

he declares at the beginning of the film.

Burroughs was in Tangier writing the first drafts of The Naked Lunch by the time Einstein died in 1955 at Princeton Hospital in New Jersey. He had informally agreed to donate his body to science and after his death it was decided that a study of the brain should be made and the findings published. Dr Harvey, the pathologist at Princeton was assigned to write a paper by Head of Department Professor Zimmerman. But Dr. Harvey never completed the autopsy report and was eventually sacked from Princeton University Hospital in 1960. Later it was discovered that the brain was missing, possibly having left with Dr Harvey, and the autopsy notes for that year had also mysteriously vanished from the hospital archive.

On arrival at Princeton, the Einstein’s Brain production team were told by Professor Zimmerman that Dr. Harvey had died and that the brain was lost. Kevin and his improbable mono-lingual front man, together with an embattled translator, embarked on a quest across America to try and locate any remaining sections of the brain. On the first leg of the journey they travelled to San Francisco via Missouri where they met Einstein’s adopted granddaughter who revealed that she had given skin samples to be compared with tissue from Einsteins brain in a genetic research project in Maryland. Returning to the eastern seaboard they arranged to meet the leader of the team working on the tissue samples, who told them that Dr Harvey was in fact alive and living in Lawrence, Kanzas.

In addition to this bombshell, the research suggested that Evelyn Einstein was in fact not just adopted by Einstein, but very probably his illegitimate daughter – according to some sources the result of an affair with a ballet dancer in 1941. 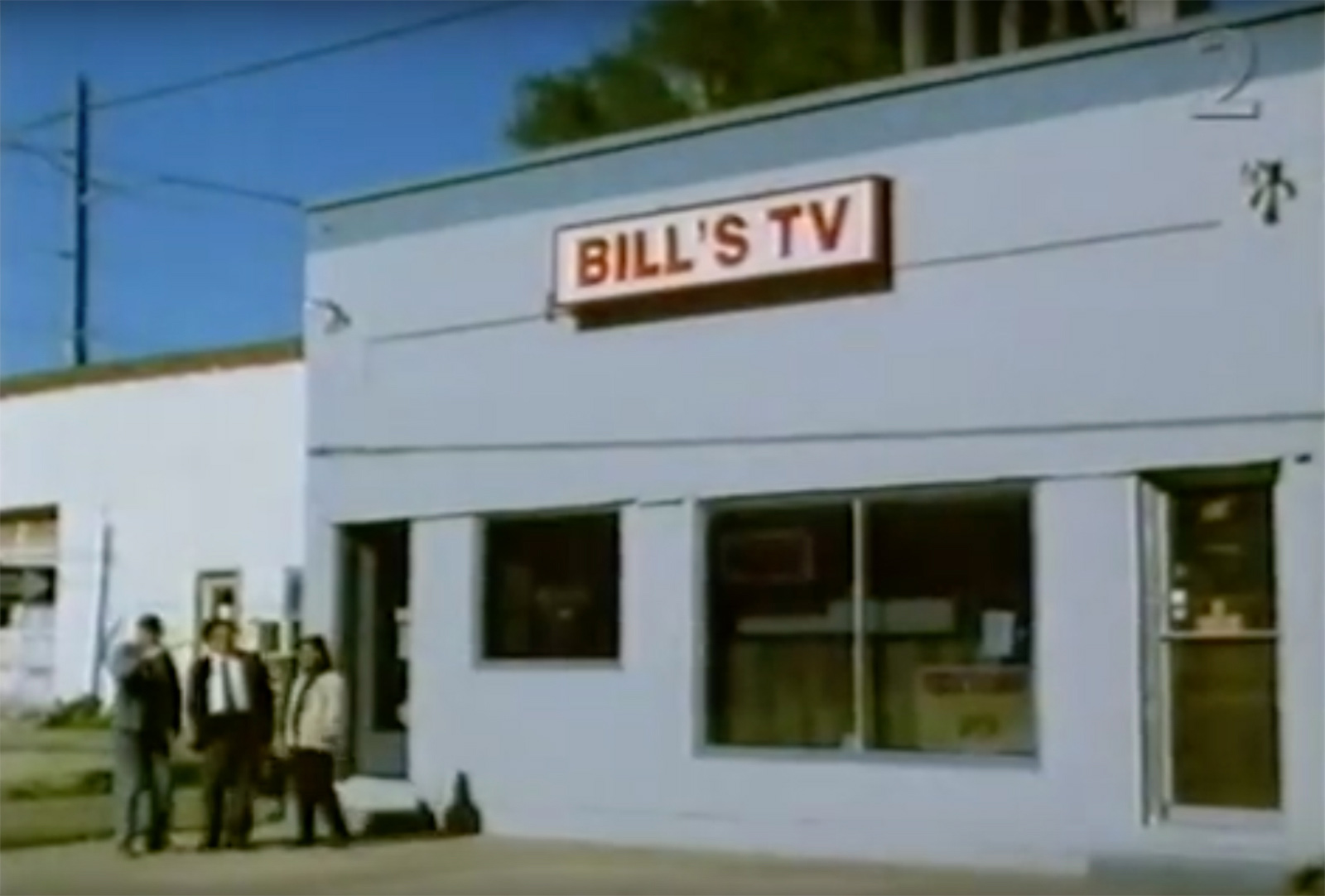 Lawrence, Kansas is thought to be the town in America furthest from any ocean and was the location chosen to be annihilated in The Day After, a controversial 1983 film about a nuclear strike by the Warsaw Pact countries on the USA. It was coincidentally also the home of William Burroughs, no doubt attracted like an angel of death to the fictional apocalypse. While not directly connected to the story of Einstein’s brain, he expressed a desire to be in the film and a scene in it shows him standing outside an abandoned TV repair shop entitled ‘Bill’s TV’, affably directing the crew to Dr. Harvey’s house, only a few blocks from his own. During a break in the filming, the frail and leathery Burroughs took the apprehensive director to shoot at paper targets in some nearby woods with a .44 Magnum – the world’s largest handgun.

Dr. Harvey, was then in his eighties and working as an apprentice plastics extruder in a local factory and was not just alive, but really did have a number of pieces of the brain stored in two mason jars which he kept in a Costa cider box along with a number of slides and authenticating photographs taken at the time of the proposed autopsy. On camera, Dr Sugimoto asked Harvey if he could have a small piece of the brain to take back to Tokyo for a talk he was planning about the legacy of Einstein.

He disappeared into the kitchen and returned with a chopping board and a small Tupperware pot in which he put a walnut sized piece of the brain as well as some murky liquid from one the larger jars.

The successful consummation of his quest filled Sugimoto with joy. He celebrated by singing his favorite Japanese song to the brain in a Karaoke bar in Kansas in front of a bewildered mid-western audience. On the return flight to Japan, the plastic tub containing the sample on his tray table, he reveals in a voice-over that he was was born in Nagasaki in 1947 – two years after it was destroyed by the Atomic Bomb.

But I don’t blame Einstein he says

The film was premiered on British television on April the 1st 1994. The release date, coupled with some of the unlikely details of the story, meant that despite its obvious merits, few people took the film seriously on first viewing. The fact that it was shot on 16mm film, coupled with BBC copyright regulations, has meant that the only copy available online is in seven sections – digitised from an incomplete VHS copy of a Swedish TV broadcast.

There are a number of on-line forums worldwide which debate the plausibility of the film, including one in Sweden in which the discussion centres on whether the director is, or ever was, a real person.