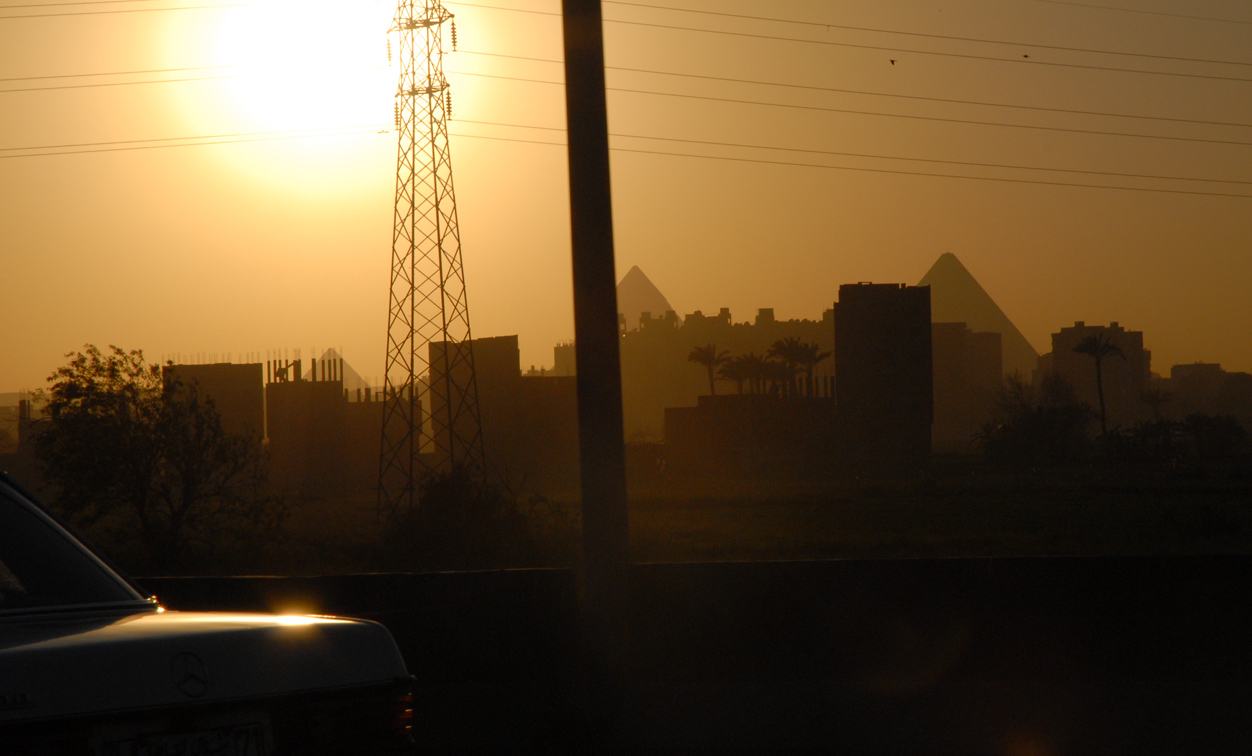 Cairo is centre of the belly dancing world and a significant area of the Khan El Khalili market is given over to the costumes, slippers and general bling that surrounds the profession. Very close, it turns out, to the area where 21 people were killed by a suicide bomber two years previously. Mina, a jewish belly dancer from London, is in town to stock up on belly dancing accessories for her on-line business, and although she has been here before, she would appreciate a hand, so we arrange to meet in a couple of days.

First, I need contact lense fluid, as mine has been impounded by the Border Authorites at Heathrow, no doubt doing their bit to make the world a safer place.

From inside the lobby of the small hotel on Zamalek island I look through the window for a taxi driver I wouldn’t mind spending a whole day with. One of the taxis parked outside is painted in black and white quadrants, like a jockeys cap. The proprietor is leaning against it and I’m guessing he has painted it himself. I go outside.

You know if there’s a chemist nearby?

Yes – it’s this way, I take you there he says and starts walking down the road

Don’t we need the taxi?

His name is Omar and he spends every other week in Aswan renovating a house with his father and two cousins which they are hoping to sell. I ask him if he wants to go on a trip tomorrow

yes, sure – no problem

The next day the traffic on the ringroad is slow, there has been an accident. A truck is pulled up on the hard shoulder of one of the elevated sections. On the ground behind it is the folded white tarpaulin that must have covered the load. An orderly group of teenage boys and young men stand by the crash barrier looking down at the branded plastic shroud. It looks like a disgarded pita bread. Three more slightly stunned looking youngish men slide slowly past the window. 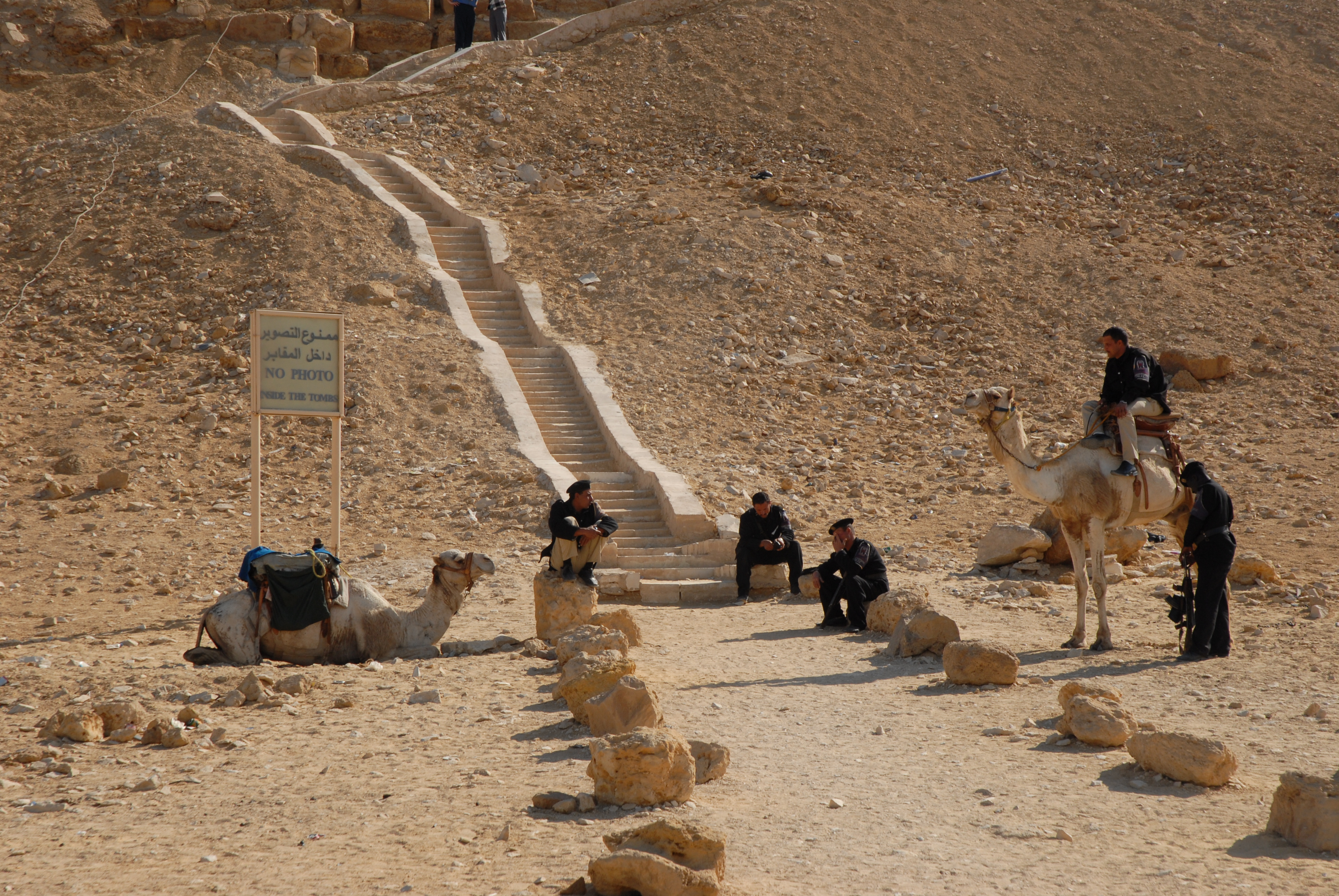 In the desert outside Cairo, it is hot and very flat. Omar lies in the shade of his black and white car. Sitting there in the desert it looks more like it has come out of a Saint-Exuperey story than off a production line. I go and climb down into the depths of the Saqqara pyramid, which is deserted except for two attendants sitting on a rock outside. On the way back he says:

You want to come to my cousins’ for a beer?

Back in town Omar parks up and goes into into a corner shop. He comes out with four cans of Stella in a white plastic bag. The cousins room is on the second floor of an old town house above a market which is busy – people shop in the evenings here. Inside the house its dark after the low glare of the early evening sun.

At the bottom of the stairs there’s an anteroom with lime green walls and a dark red sofa on which his cousins Malik and Karim are sitting watching TV. We shake hands. The house is extremely old. The stairs are stone and the treads deeply worn in the middle. In the room we talk English and drink the beer, Karim rolls small, immaculately crafted spliffs. They look like the work of someone with netsuke experience. He looks up.

Do women smoke same as men?

It is very difficult to have girfriend in Cairo, says Omar

It’s a big problem for us… We can have no relations with Egypt women unless we are married. It means you have to have a house and furniture – a lot of furniture – very expensive of course. I am not so strict Islam – but the society is very strict (draws hand across throat).

Egypt women even when they are married will not be seen with lights on by their husband. I would like to marry American woman or English – how much does it cost – a flight to London?

After a while they start speaking in Arabic. It sounds like they might be arguing and every so often they gesture towards me. Suddenly I am aware I’m somewhere in the middle of Cairo with three men I don’t really know …

I zone out slightly and start wondering if accompanying a Jewish belly dancer on a shopping trip around the biggest market in Cairo is likely to be a problem… then I remember that over in Giza, the Son et Lumiere show must be beginning around now.

Fat people in pale blue shorts and white, calf-length socks will be lowering themselves onto the canvas seats of tubular metal chairs, set out in rows on the sand. Their voices will hush as the lights go down and Richard Burtons clipped tones ring out in the desert twilight, as they have done nightly since 1961. His immaculately crafted sentences drifting away into the warm, still darkness past the sphinx, hunkered down in its pool of lurid green light and speckled by lasers.

For this experience tourists will pay handsomely, although they could just as easily watch the show from the roof of a nearby Pizza Hut for the price of a Diet Pepsi. A few days before, while in the process of refusing a ride on a rickety horse called Michael Jackson, I discovered that the Show’s management had come up with a plan to prevent tourists from dodging the Son et Lumiere box office. They shine extremely bright, focussed lights at the roof of Pizza Hut and various other nearby buildings, making it impossible to properly enjoy the show. However, In a counter move, strangely reminiscent of Star Wars, Pizza Hut installed baffles to defend its diners from the spectacle destroying rays… 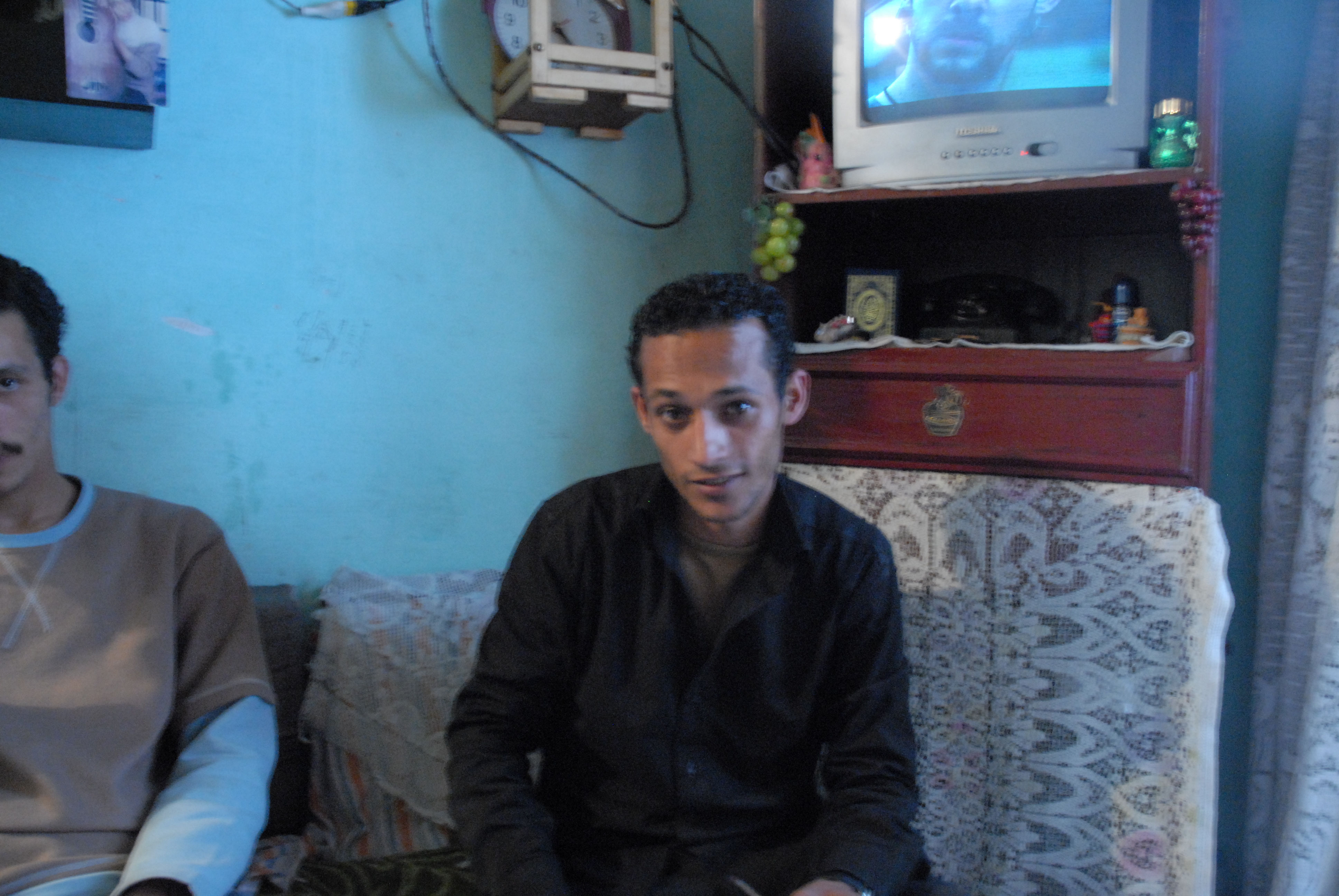 Karim breaks into my bubble…

Do you have Pekinese dog in London?

Omar wants to know – do you have Pekinese dog in London?

Yes, why? He turns one palm up and gives Malik an ‘I told you so’ expression

He says he saw a woman coming out of the Australian embassy with a Pekinese and now he wants one really bad!

Next morning I take the short walk across the October bridge to the Egyptian Museum. At the end of the main hall stands the collosal seven metre statue of King Amenhotep III and Queen Tiye. Queen Tiye was known for her strong views and forthright nature and their marriage is thought by many to have been an inter-racial one and a love match, Queen Tiya probably being of Nubian extraction. Their faces are both possessed of the kind of timeless inscrutability one expects from Egyptian statuary of the period. Monumental stonework with expressions to match, destined to last as near forever as makes any difference: so unlike the free-flowing charm of the Minoan art of the same period. It’s easy to imagine the corporate style guidelines for artists and designers in the 18th Dynasty running into the tens of pages – but these two have kept something back for themselves.

Their twin smiles suggest the solidarity of a private moment shared under the public gaze. Unsuprisingly, photographs of this sculpture are generally taken from the front, but in the museum you can go round the back and discover Queen Tiye’s hand firmly cupped around one half of her husbands arse in a gesture that combines intimacy and humour, suddenly making sense of the sly smiles that flicker across the stonework.